I'm wired & inspired, so let's get this down quick. I need to lay it down before it gets away from. 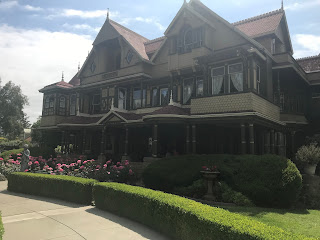 This is the Winchester Mystery House in lovely San Jose, CA. I visited this on my Big Trip. Matter of fact, it was the only "tourist" thing I did, though I wish I'd done the Dodge City tour. This is all from memory rather than what notes I took, but I like this better anyway.

The Big Trip was when I drove out to see my brother & his wife in Oregon & buy legal weed in every state I passed through before heading down to San Francisco before turning East. There have been a couple of times in my life that has, for lack of a better phrase, blown my mind to the point where I came out a little different. First time away at college, first sexual experience, first real adult job, first extremely passionate sexual experience. first trip with peyote, that sort of thing.

This was one of those sort of things. The Trip, I mean, but also learning what I learned about the Winchester House. I ain't kidding, it rearranged my perception on a whole mess of things. That's always fun, but that Trip was full of them. This is this one's story.

I may have said elsewhere, but despite my cynical, fairly materialistic, almost nihilistic view of The World, I've long had a fascination with the... unknown. The supernatural. The paranormal. The anomaly & the unexplained. One of the saddest moments of my life was realizing that, no, parapsychology isn't as interesting or fulfilling or not bullshit as even a "soft science" like economics. It's all in your mind, you know.

But I dug it the most, & part of the reason I got into journalism was I wanted to be Colin Wilson. I never read any of his fiction. Hell, I'm not even sure if I knew he wrote fiction at the time. But he wrote books about haunted houses & fearsome critters & unexplained phenomenon & weird history & what all, & that pulled my string, son.

Admittedly, sidetracking happened. No one planned on it, but happen it did. Still, I've kept my fascination with the weird & have wanted to see the Winchester House since I was, like, 8 or so. Actually thought it'd never happen, you want to know the truth. 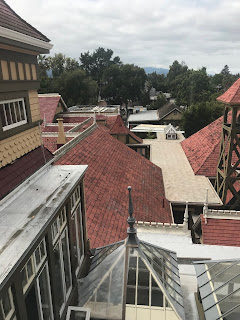 Anyhow, here's the story of the Winchester House. It was designed by Sarah Winchester, starting from 1844 until her death in 1922. In, 1906, the San Jose area felt the force of the big-time Earthquake in San Francisco, so parts of it were left unfinished & the workmen moved to another part of the house.

See, she was the widow of William Winchester, who made a fat packet on the rifles that bear his name. "The rifle that tamed the West," they say, & I advise to get what you want out of that. After his death (& the earlier infant death of her only daughter) Sarah backed up & left her home in New Haven, CT, & headed West.

Spiritualism was all the rage in the later half of the 19th century, considered a serious scientific en devour, & Sarah was down to the ground with it. And on advice from the Late Mister, she bought land in the Santa Clara Valley & took to building the house.

Every night at midnight, Sarah would hold a seance & commune with the spirits, one assumes, & every morning she'd tell the construction foreman how she wanted things for the day. Some days it'd be "carry on" & some days she'd rework the whole thing or even shift them to an entirely different part of the house. It's been said she did that to either house or hide from the plethora of lost souls who stepped on a rainbow due to being on the wrong end of the famous Winchester.

There's question about that, though, & Sarah might've just enjoyed the process. She was sharp as a tack, Sarah, & knew her stuff when it came to architecture. Apart from the aforementioned earthquake, things went pretty much like that for the next 38 years. Sarah passed away peacefully & in comfort, leaving behind her sister & niece with instructors to stop building & move on.

Here's the thing. For the 19th century, Sarah Winchester was one of the richest people in the world, with something like 500 million & earning 25 thou a day from her 50% ownership in the rifle company. She doesn't get enough attention but she was an woman of great willpower, character & intelligence. Plus, for whatever reason, she was convinced that the ectoplasmic remnants of the dead were telling her to build this wacky house. But did it in a way that made it work.

All of her stairs had 13 steps, no more, no less. However, due to an injury she suffered to her leg, the steps she'd use were always small, even if the stair had to make five landings to get up two floors. She had one of the most up-to-date electrical system in existence, as far as lights & alarms for the servants. She had a heating set-up that left almost no waste & recycled everything. The house made it's own water for the atrium & had a door that led right outside like a cartoon. 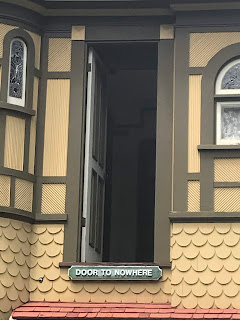 She paid her staff & construction workers something like four time the going rate & helped with medical bills. People rarely left her service & she never had to fire anyone for any reason. She left her sister & niece quite comfortable, only with the stipulation that they don't hang around. After she died, her servants & the construction workers were either comfortable in their old age or had a little money to float on before getting another gig.

And she paid her goddamn taxes & still gave to her community, contributing a great deal to the very existence of San Jose, which is, as we've noted, lovely.

So, explain to me why shit like this happens. Tell me why corporations treat their workers, the people that actually do stuff to make their money, like frightened cogs, if I may mix my metaphors. Just another easily replaced body. Give them too much guff, they might decided they don't someone to do what you do at all nor will they pay the other workers their share of the pay you're no longer getting.

Jeff Bezos has a big say in three companies - Amazon, Whole Foods, & The Washington Post - & he has enough money just laying around not doing nothing to put it to use to benefit his labor. Pay everyone enough that they can get buy on one job & don't have to work themselves to death just to survive. Don't worry that it'll add to the overhead if you make their work space actively comfortable instead of "just fuck 'em". Give them a hand when they're sick or when life kicks them in the eyes.

And he'd still have enough money just laying around not doing nothing to be able to sit around in his PJ's watching "Doctor Who" & do it in the manner to which he is accustomed. Let Elon Musk's goofy ass waste time in space, you're killing the people that make you money, dude. They're going to get tired of it & string you up by your toes.

Okay, then. I just had to get that off my shoulders. Do go to the Winchester Mystery House, it's a elucidating diversion well worth the 30-some-odd bucks. I might come back to this later, I don't know. Right now, I think I'll take a nap. Here's another picture from the House. Why no one's written some sort of weird fiction Ambrose Bierce & Sarah Winchester, I don't know. 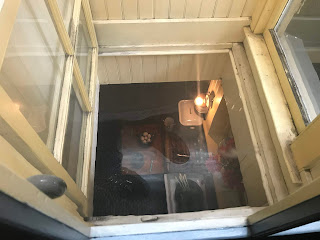 Dear Y'all
Peaceful Valley, Mississippi
This is an attempt to get back into writing, both to sharpen my chops & hopefully find something to write apart from dark political ruminations & tales of my own mental issues. My plan is 500 words a day until something drastic pops out or I give up. Share the ride, won't you.