Man, am I glad this week's done and gone. I think we can all agree that it was been an active one.

Honestly, I'm not going to waste y'all's time today. Main reason is I did a little photo essay-type thing over at the Tumblr site. It's all about my varmint buddies and how they're getting along. It rained pretty hard today but it was fairly warm, so I decided to walk around a bit after it slacked off.

As of this writing, the brother and sister-in-law are en route for an early Thanksgiving visit. Coming from the great state of Oregon, they were able to send me some good medicine along with Christmas knick-knacks for Momma. I got wired but overindulged a bit, so I was able to get inspired. That's okay. I got plenty of time to kill.

Finished the second book in Chris Fox's Deathless series, No Mere Zombie and I've got the third, Vampires Don't Sparkle on deck. Still digging the story and it's moving along at a nice clip, with more pieces of the puzzle falling together and more expansion of the lore. There's a solid character arc for all the characters so far, a couple have been trimmed away while some others given more prominence.

I hope it doesn't get into a slog, because frankly, series books are my least favorite storytelling method. I don't mind shared universes with extended but interconnected books, but a big Dresden-like series, I think I've said, doesn't really appeal. But this wraps up with two more, so I'll move on through.

As for the News, well, we're still dealing with the fallout from this week's incredible Impeachment testimony. Trump spent the morning pitching a fit on Fox's morning National Bim Hour, flat-out lying, and digging the hole deeper, while do-boy Lindsay Graham spent the morning giving his Lord the Hunter Biden investigation he so desperately needed. For his part, Joe Biden seems actually surprised and sadden by Graham sticking the knife in with this already debunked conspiracy theory. If it gets any traction in the Senate or just manages to baffle the press as it's meant to, well, time will tell.

The other straw being grasped at by the Conservative Beast, that tampering by an FBI lawyer might have had a hand in the 2016 Russia probe in Trump's favor, looks to be nothing worth noting. Of course, that won't stop the hooting goons. They still think Obama just gave Iran that money or his office gave fissionable material to Ukraine just for the hell of it, so don't hold your breath on that one

There really isn't much else that grabbed my attention. Rich twit Elon Musk's "cybertruck", a cross between a truck and a sports car, is a sad joke, but if anyone really expects anything substantial from this yo-yo, they only have themselves to blame. But that was this morning, and by the end of the day, I just feel that same weary depression that there are actually people on this planet who'll get into arguments defending that geek. Everyone needs an obsession, I guess.

Beyond that, Otis is pouting that I won't let him go back out in the rain and we're all looking forward to a nice visit this weekend. If I don't see you before then, have a nice weekend and stay dry. 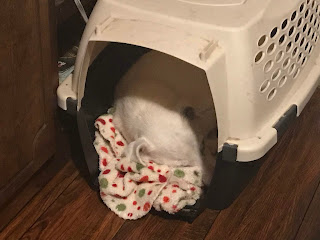