Okay, see, I have fairly severe sleep apnea on top of everything else. It's part of the reason I used to zombie through my old job apart from, you know, complete misery. These days, though, my hours are my own. However, I try to maintain a regularish schedule, if for no other than doing so seems to help keep the Black Clouds away.

But, unless I'm on the road, I just can't stay awake all day even after a good night's six hour's sleep. I have to be moving around, but unless I really have to, I don't leave this hill I'm on. In any event, I'm good and it don't cost nothing, so I can nap when needed. Still, a schedule's nice.

Otis generally wakes me up about six, so I let him out to do his business while I feed the cat(s) and Fuzzy, before getting the paper. While breakfast is cooking, I look to see what fresh hell the news brings. After breakfast, I spend a couple hours going through the days events to see what's interesting or worth sharing. Around noon or so, I take a nap for a couple hours and then hit the gym for a bit. I don't really do much there, just knock a few miles out on the walking machine as to keep active.

I spend the afternoon either pounding this nonsense out, depending on how inspired I am; if not, I read or play some game until suppertime. Whatever I did before supper, I do the other afterwards, and then fiddle around until bedtime which is usually after 11 p.m. Unfortunately, I couldn't sleep last night so I decided to pop up and write this for the Tumblr site, and I'm pretty proud of it.

In a nutshell, an audio clip of stupid and ugly white nationalist loser Richard Spencer was leaked by fellow smelly and chintzy grifter Milo Yiannopolous. Basically, it's Spencer revealing himself to be the common dirty little racist to everyone but the members of the who were bamboozled by the fact he wore nice suits that were too small for him. I was going to save that for this, but I like how it all came out. Other recent Tumblr leavings I think are worth looking here and here. Do check 'em out.

What all that means, getting back to the point, was I managed to push my nap into extra hours and missed my gym time. Oh, darn.

In new kittycat news, I've put some flares out to maybe find the little love a new home. I've got my friends in New Orleans and in Athens looking for a good house which would, maybe, give me an excuse to go and visit. The Tupelo-Lee Humane Society isn't open until tomorrow, but I'd rather find him a place a good place that spin that particular roulette. They've got a new facility I haven't seen, but the last place had cats in carrying cases four deep. Small-town Deep South, y'all, apparently that's how we roll.

He is a sweet little thing, maybe the sweetest cat I've ever met. He likes to crawl up and sit on my shoulder. I thought at first he'd wandered away from one of our neighbors, but upon further reflection, I think he's a dumper. See, people will often slow down at the woodline on the road, drop off some varmint they don't want anymore, and, boom, we have a new pet. That's house Bounce and Fuzzy came to the Hill, and they're by far from the first.

This little guy is not only too friendly and not inclined to leave, plus he has absolutely no fear of dogs. He does, however, recognize that my buddy Otis, the Jack Russell, is bad news and needs to be avoided. Unfortunately, Bounce doesn't seem to like him, and I'm worried that might make Bounce think I don't love him anymore and decide to leave. I can't have that, even for a super-cute sweetheart of a kitten.

So, I hope to find him a good home and maybe somewhere else, 'cause this ain't cat country. Hey, if you can convince me of your bona fides, I might be inclined to ride out to make a trade if the drive ain't too fierce. Say, a six-hour drive from Tupelo, MS, and no further. No promises, though, but if we can work something out to give him a loving forever home. Here's a picture of him, so we know what we're dealing with. 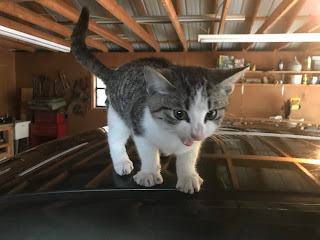 Now, you see my dilemma? Isn't that a doll? Plus, he is so full of love it's crazy. Help a country boy out, y'all.

Okay, enough of that. Let's look at the News. Hmm. Well, the biggest news is in Mississippi and several other states, tomorrow is election day. Again, along with Mississippi, several states have governorships up for grabs. Unfortunately, they're on their own. For the rest of my fellow Magnolia Staters, The Clarion Ledger has a nifty voters guide for state elections.

Now, I'm not one to make endorsements, but I have to say I'm leaning towards Jim Hood. Not only are Republicans, in gneral, fanatical dingbat ideologues, I've been to the governor's mansion in Jackson. It's far too nice to let Tate Reeves leave his regular trails of slime.

Here's a nifty New Yorker piece on how the U.S. government tried to deal with anarchists, socialists and other people who thought things could be better. Yes, despite what dingbat conservatives want to believe, there's a long history of socialism and fighting against capitalist greed heads here in these United States.

Let's see, what else do we want to touch on.... ah ha, this is interesting. Seems the Democrats have released the first transcripts from their closed-door interviews to the public, and they are interesting indeed. Most notable is the revelation that former U.S. Ambassador to Ukraine Marie Yovanovitch was warned to "watch her back", as the Trump Administration leaned on her to peruse the conspiracy theory concerning Hunter Biden and demanded she praise the Blind Idiot God in all things.

An intriguing quote from Michael McKinley, former senior adviser to Secretary of State Mike Pompeo, a career foreign service officer who was also interviewed at the October 11 session:

"I'm just going to state it clearly. As a foreign service officer, to see the impugning of somebody I know to be a serious, committed colleague in the manner that was done raised alarm bells for me.


All the while, Trump's been getting booed and being a shitass to Gov. Gavin Newsom about the fires currently ravaging California instead of using the resources of the United States to help the world's fifth-largest economy. The bastard. No, there's really no excusing this, I don't care what you think of Nancy Pelosi or San Francisco. I don't do much patriotism, but these are Americans and there's just no reason to not help, much less not be a petulant punk about it. But that's our president: kiss his ass repeatedly or he leaves you to burn.

Okay, that's good. I don't want to get worked up. I'm working the election tomorrow so there's no telling what we'll get tomorrow night. Regardless, friends and neighbors, go out and vote. It really is the absolute least you can do.

Email ThisBlogThis!Share to TwitterShare to FacebookShare to Pinterest
Labels: blind idiot god, bounce, cat, housekeeping, impeachment, it came from tumblr, otis, racism is a thing, sleep apnea, the right is full of dicks and they should be mocked