I'm wired & inspired, so we might as well jump into this before it slips away. I'll probably take another nap before this day's over with.

I'm sleeping too much & I'm always tired. I don't know if the CPAP would actually work, because at least three times a night my sinuses clog up, regardless of environment or weather. Sometimes it hurts to be awake, no matter how much or how little I sleep.

I'm not terribly in the mood for this. Frankly, only thing I want to do is go back to sleep, but I might as well try to stick it in & interact with society. Why is YouTube showing me a commercial from the Epoch Times? Are they the new Washington Times, what's the endgame here? I know the platform has been a cesspool of right-wing shittassery & weird screwheads that go out of their way to be pissed off at something. I suppose since they don't procreate, they need to recruit, but why are they bothering me? I've been trying like hell to keep that sort of shit off my personal YouTube page, so I must be slipping somewhere.

Well, John Bolton got fired sometime in the last 24 hours & Trump did in his usual petty, red-assed way. It's entirely possible he fired his National Security Advisor via Twitter, & it's possibly the sole, shining moment in his presidency so far. But that's a low bar, man.

Regardless, I hope Bolton pulls his mustache off in betrayed, pants-shitting rage, 'cause he's an evil shit & in a fair world he'd spend his days being pelted with walnuts thrown by rosy cheeked Iraqi children. He's a foul brute & a viscous thug who doesn't want to groups of of heavily armed young people shoot each other enough until one side gives up or runs out of dudes. No, he wants one of the world's supervisor to regularly stomp the shit out of place that's been well & thoroughly stomped, & thus can't bother you by fighting back enough to run you off.

Remember that bit Bill Hicks bit where he's talking about the generals in Iraq using the fancy weapons? This one, if you haven't, but that's what we've been doing in Afghanistan for the last almost two decades. And this is after the British Empire & the Soviet Union had ground one of their hands down to a stump doing the same damn thing.

And it'll probably have the same result, because instead of health care, education, infrastructure, housing, well-being or anything like that, we're spending all our money on things to kill people who will never give up. This is after us being literally run out of Vietnam, so we should know better.

But Bolton - & foul shitstains like him - don't care. They don't care that the financial lifeblood of our society is so fouled up that those young people they loathe so much have no option other than join a massive killing machine so the Military-Industrial Complex can play with new toys & get paid for it. Their like evil video game testers. We are a screwed up society, man.

Supposedly, this all stems from Trump's weird tweet the other day that he had "uninvited" the Taliban & the current government of Afghanistan from peace talks at Camp David on 9/11. And he was kind of a shit about it, too, like he was doing us a favor. If nothing else, the optics on that is poorly figured. You may complain that "it's all politics" to be a bit shocked the dopey bastard would pull this, but that's what politics is, you test-tube babies.

Dammit, there goes the internet again. This keyboard's sticking, I think. The space bar is fighting me, but it's emphasis isn't writing & it's the first time I've done this much writing since I bought this computer. Anyhow. I wonder if he's just stirring up all this shit to smokescreen him being a toital bastard for the sake of being a total bastard concerning Bahamian refugees looking for food & dry land after Dorian.

We keep wondering how much sugar folks like Hope Hicks or Madeleine Westerhout has thrown on the old lech, but I'm starting to wonder just what sort of hold Steven Miller has on his balls. That is one guy who has not been shook loose from the president's monkey tree nor do you hear of him being threatened by possible replacements, like Mike Pence. That oleaginous little shit doesn't seem Trump's type, but go figure.

Probably has to do something with his rallies. The faithful don't care whatever goofy shit he say, they have no problem with his outre lies; they are down with it because he gleefully validates that jingoistic white nationalism. I still say if he just did these rallies once a week, he wouldn't give a shit about being president. The man likes to have his ass kissed.

And the media, at least the big players, feed into it. Unless she's already deleted it, the D.C. correspondent for New York Magazine Olivia Nuzzi tweeted "I love drama", & that really doesn't help. Recall that the head of CBS News said something along the lines of Trump's election might be bad for the country, but it's great for him. Just look at this: 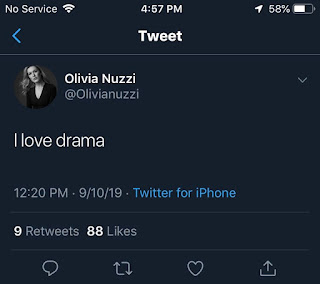 I mean, can you believe that? Can you believe someone with that kind of pull & that kind of gig would just... give away the game like that? I mean, how out of touch is that, to not care the damage this Administration is doing to normal people just trying to not die. Just all part of the Circus & anyone at her level of things doesn't have to worry about anything.

As much as I hate to associate with anyone from whatever side who gets a sandy butthole inre: "The Mainstream Media", but there is something seriously fouled up about this & how things are run. It's the same thing as Bret Stephenson's bedbug pout last week, where he compared people making fun of him with Nazis exterminating Jewish people. They are out of touch & unconcerned with their readers beyond how many nickles they throw, but that's what you get when you let the accounting department run your newspaper.

Ah, I need to wrap this up. Went to see the Psych Doc today. Fair enough visit. He's still down with this & is encouraging me to find ways to monetize it. I have no idea how the hell to do that, neither. I don't think, after doing this for a couple weeks, that the "content provider" thing is going to work out. That's too much like work, & that is where it all falls apart. I wonder if this is what my brother goes through when it comes to making music.

All right, that's it. Don't get the Fear, 'cause it's too Weird out there for anyone to run amok safely.
Posted by Dear Y'all at 5:25 PM